As humans are primates and primates are gregarious and visually oriented, facial appearance, including the teeth, has likely influenced social self-consciousness since time immemorial. In response, throughout the ages people have tried various devices for maintaining pleasant smiles and, consequently, healthy mouths.

Toothpicks, in the form of wood, bone, reeds, quills, thorns, ivory, metal or plastic, have been used for over 5,000 years and possibly since prehistoric times. 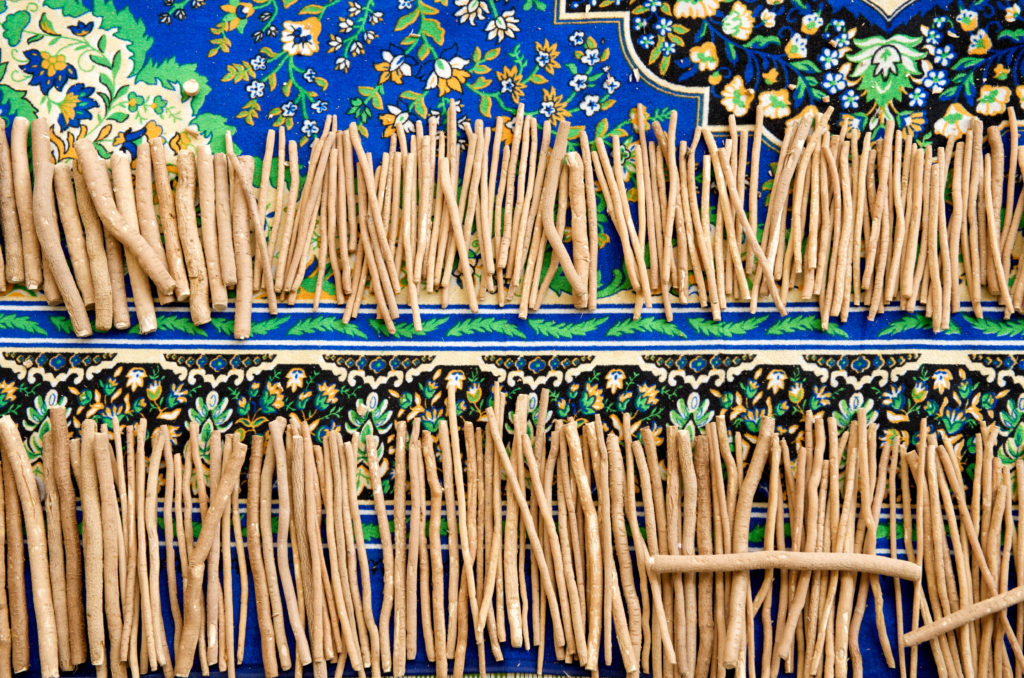 Fibrous chewing twigs (shown above), cut from various trees and known as ‘siwak’ or ‘miswak’, have been recovered from Mesopotamian, Egyptian, Babylonian and Etruscan archeological sites, and are still widely available today. Using a finger, with or without a covering, to rub the teeth was popular in ancient Greece, and in 17th- to mid 19th-century Europe, a piece of linen or a sponge was preferred.

In 1683, Antoni van Leeuwenhoek, Holland’s father of microbial biology, was the first to observe and describe microscopic biofilm bacteria gathered from the scruff of teeth. Though biofilm’s properties would be poorly understood until the late 20th century, van Leeuwenhoek noticed its susceptibility to disruption after he compared depleted samples, taken from his daily-rubbed teeth, to teeming samples taken from the unwashed mouths of several old men.

The toothbrush, made of natural bristles held at a right angle on one end of a handle, is thought to have originated in China in 1498. A toothbrush with bristles oriented as in a paintbrush, spread from Spain to France circa 1590.

During the 17th and 18th centuries in Europe, toothbrushes were considered rare luxury items, with silver, gilt and gold handle designs, used mainly by the wealthy. Pierre Fauchard, France’s 18th-century father of modern dentistry, advised cleaning teeth with a sponge and warned against using a horsehair toothbrush as it could cause damage. Manufacture of a simple cow bone-handled, boar hair-bristled toothbrush began in England in 1780, but not until circa 1850 were toothbrushes produced in large, affordable numbers and widely favored in Europe for tooth cleansing.

Although brushing was advocated by some American dentists as early as 1779, toothbrushes were mainly imported from Europe and scarcely used. A U.S. patent first appeared in 1857. In its 1876 catalog, the S.S. White Manufacturing Co. offered “superior” French and English toothbrushes made expressly for their company’s sales, and American toothbrushes manufactured for the dental trade.

In 1884, when Massachusetts’s Florence Manufacturing Company acquired production rights, the Pro-phy-lac-tic brush, a favorite into the 1940s, soon came on the market. By 1893, colorful celluloid handles were found in dental catalogs alongside bone handles, but were later abandoned due to their inherent combustability. In the 1920s most affordable toothbrushes were imported from Japan, but still only 20% of the American population owned one.

Toothbrush development took a giant leap forward in 1938 when DuPont announced their Dr. West’s Miracle Tuft brush made with nylon filaments, not natural bristles. During WWII, with a shortage of cow bone, needed for soup, and the absence of craftsmen, gone for soldiers, synthetic handles materialized and the enduring bone handle faded from production. Subsequent innovations during the 1950s to 1990s led to toothbrushes with softer nylon bristles bunched in tufts of varying size and height, clear and vibrant plastic handles sometimes angled, and smaller brush heads, among other choices. Appearing in the 1960s, the electric toothbrush, to this day, continues to compete in popularity with the manual toothbrush.
— D.D. 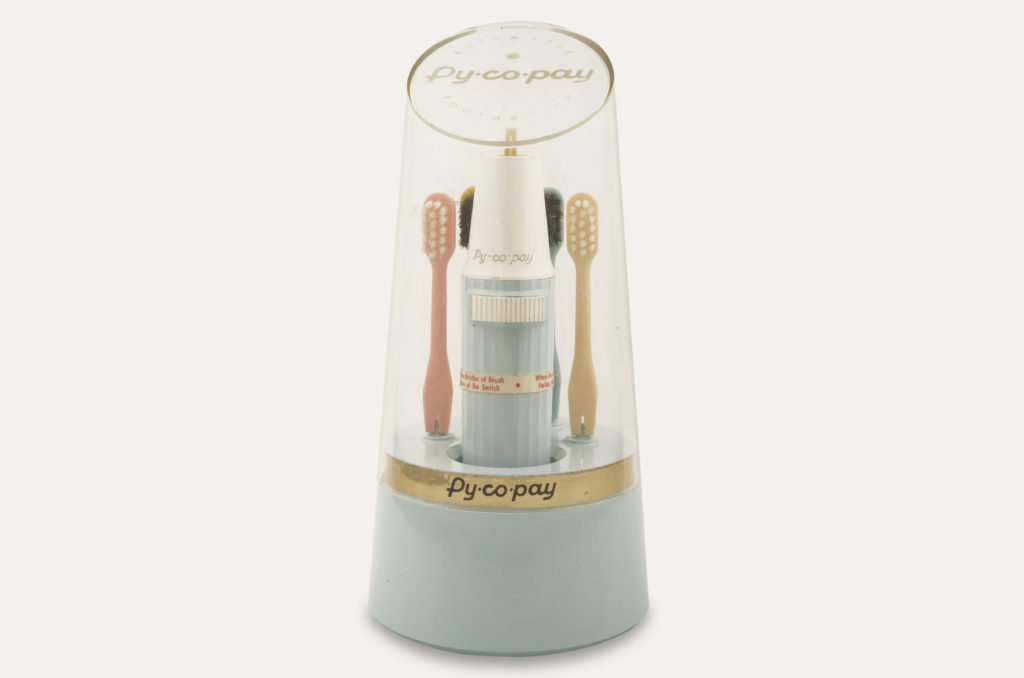