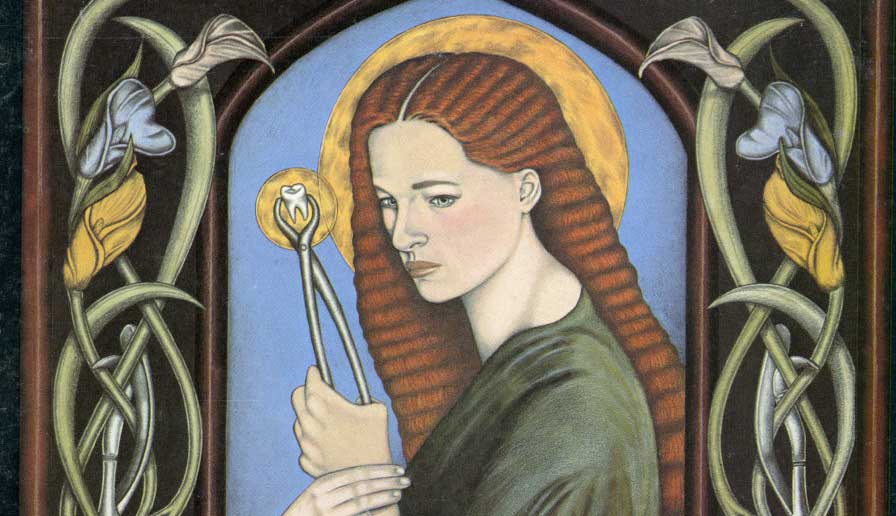 Apollonia, born circa 200 AD, is reputed to have been of Greek descent and the virgin daughter of a heathen magistrate of Alexandria, Egypt. Held in high esteem and admired by local Christians for her “chastity, religious devotion, and charitable deeds,” she was martyred in the year 249 AD. The details of her torture and suffering were remembered vividly and recounted by those who witnessed the horrific event. Some fifty years later, in 300 AD, prior to Christianity becoming the Roman Empire’s official religion, she was canonized as St Apollonia. Subsequently, she became the patron saint of toothache sufferers and of the dental profession. 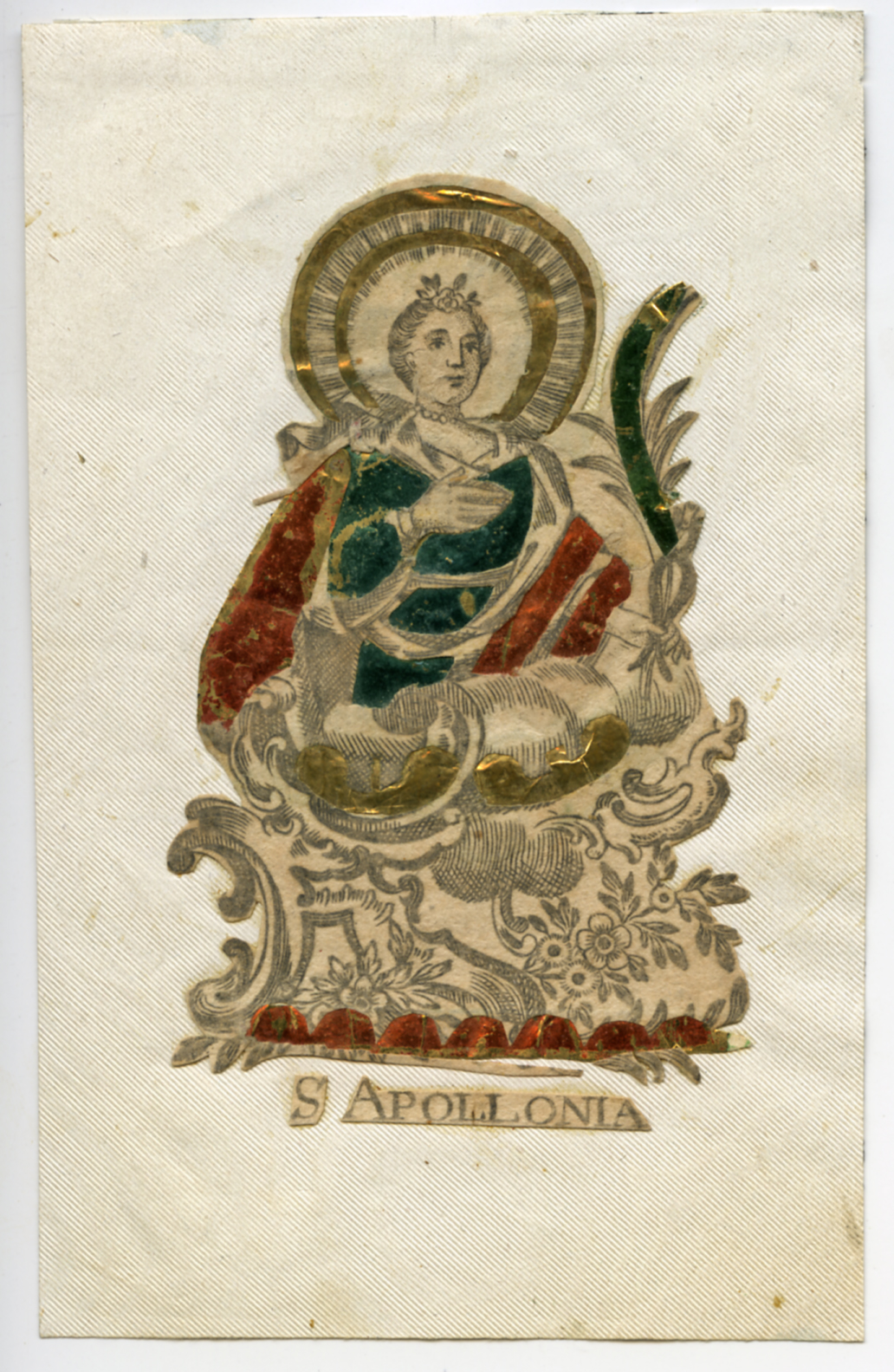 Possible gold foil prayer card
Decorative cut-outs are laid over a backing of green, red, blue and gold foil in this small but elegant piece that may have been used as a prayer card, date unknown.
Dimensions: 3 1/2″ x 2 1/4″ (8.9 x 5.7 cm)
University of the Pacific Permanent Collection, Donor: Unknown

According to historical accounts, in 248 AD the citizens of the Roman Empire were particularly anxious. That year marked Rome’s millennium, with 1,000 years having passed since the city’s fabled founding in 753 BC by Romulus and Remus. Although the Empire’s inhabitants appreciated its splendor and longevity, a feeling of doubt existed about its future. Would the next millennium bring continued stability, or would political unrest within, and barbarian incursions at the borders, bring chaos and uncertainty? During the millenary celebrations, a Roman poet is said to have foreseen catastrophe caused by the Christians. Despite the Roman Emperor’s efforts in 247 AD to appease the ancestral pagan gods with sacrifices and ensure peaceful succession by ruling jointly with his son, the two were killed in battle in 249 AD, and instability began to spread. A sense of foreboding must have been pervasive among the Empire’s citizens.

In that same year, 249 AD, persecution of Christians by the “heathen populace” of Alexandria, Egypt reached heightened intensity, as noted in an historic letter exchanged between two clergymen. The letter describes a mob attacking and torturing five Christians, Apollonia being one among them, who either refused to glorify the pagan Roman idols or to denounce God. “Apollonia, an aged deaconess, was seized. With blows in the face they knocked out all her teeth, and then, kindling a great fire outside the city, they threatened to cast her into it unless she uttered certain impious words. She begged for a moment’s delay, as if to consider the proposal; then, to convince her persecutors that her sacrifice was perfectly voluntary, she no sooner found herself free than she leaped into the flames of her own accord.”

For many centuries following her death not much was written about St Apollonia, but in the 14th century, as dental ills among people of Western Europe increased, her glorification, retold in at least six differently embellished accounts of the original incident, began to spread. No sophisticated means of dental treatment or extraction were available then, and home remedies offered little relief. Desperate to alleviate their intense pain, toothache sufferers began to beseech the benevolent spirit of St Apollonia for divine intercession. In recognition of her importance as a sacred benefactor bringing solace to the dentally afflicted, many churches, chapels, convents and shrines were dedicated in her name. She has been depicted in artistic paintings, statues and woodcarvings, and revered in cathedral stained glass images, religious dramas and literature since the Middle Ages. In various areas of Europe, fasting and uttering an appropriate prayer on the day of her celebration (Feb 9) is believed to guarantee a toothache-free year.

Today, St Apollonia is considered the patron of dentistry, and many dental societies, magazines and practices have been named in her honor. Her association with dentistry is often attributed to the 18th century, but may have occurred much earlier. During medieval times, various European trades embraced Christian martyrs to protect and symbolize their occupations, and she would have been an obvious choice for those specializing in toothache relief. Early evidence includes an engraving of her in Franciscus Martinez’s 1557 work De Dentione, considered one of the oldest monographs in the history of the dental profession.

As “an admirable virgin in advanced age” made an unappealing subject to painters, writers and the distressed, St Apollonia’s image grew youthful and more beautiful, and her story increasingly romanticized, through the ages. This exhibit of Saint Apollonia is by no means exhaustive but includes historically representative works of art donated to the Ward Museum, as well as other available images among many artistic renditions of her.
— D.D.

Explore the collection in the slideshow below: